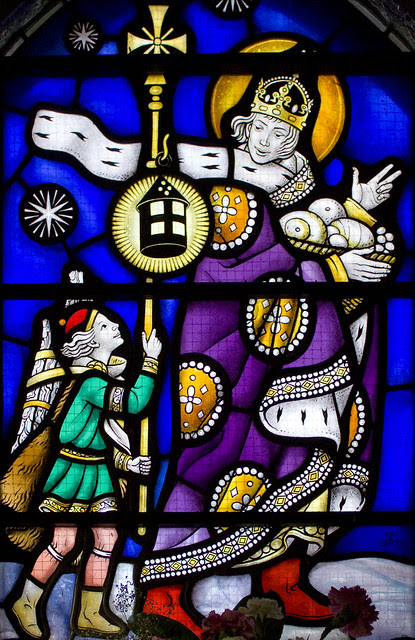 "Good King Wenceslaus looked out, on the Feast of Stephen, When the snow lay round about, deep and crisp and even..." This carol is probably all that most of us know about St. Wenceslaus (also spelled Wenceslas) who lived from about 907 to 935. He is the patron saint of Bohemia, or the Czech Republic as it is called today. He is an early example of rex justus, a just king. His feast day is September 28 and remains a national holiday in the Czech Republic.

When I think of Wenceslaus now, I don't think only of Christmas and carols, but of Cain and Abel, for "good king" Wenceslaus was murdered out of jealously by his brother.

Wenceslaus became a Christian duke (later posthumously given the title of king) when Bohemia was still in the middle of converting to Christianity. Wenceslaus' father, Vratislaus, was a Christian. His mother Dragomir, was a pagan who had accepted baptism as part of the marriage agreement with Vratislaus. Based on Dragomir's persecution of the Church to come, she put no credence in the sacrament.

Wenceslaus also had a paternal grandmother, St. Ludmila, who was praying for him and who educated him in the faith. After Vratislaus died, the young teenage Wenceslaus looked to his grandmother for spiritual formation. Dragomir became regent in her son's name until he would be old enough to rule in his own right. Newly empowered Dragomir sought to convert Wenceslaus back to the old pagan religion. St. Ludmila fled with the boy to a Christian castle named Tetin and refused to return Wenceslaus to his mother under such circumstances. Dragomir sent her agents to strangle St. Ludmila which they succeeded in doing. She also banished priests from the realm.

Wenceslaus had fully internalized his own beliefs as a Christian. The nobility saw Dragomir as a danger and so promoted the idea that Wenceslaus should rule earlier than was customary. When Wenceslaus ascended to the ducal throne, he protected the priests and the churches.

As the stained glass depicts, Wenceslaus is said to have lived a pious life, giving food and alms to the poor, visited prisoners and educated the people in the faith. He also had a reputation of ruling justly according to Church teachings. Wenceslaus also faced invasion by his neighbors and saved many lives by paying a tribute instead of fighting further. This was no easy feat and required a great deal of diplomacy including gaining the neutrality of his own mother so that he could rule unfettered.

Dragomir's second son, Boleslaus (or Boleslav) was more influenced by her. He wanted to be Duke. Wenceslaus was on his way to celebrate Mass in the early autumn when Boleslaus hit him. A struggle ensued, but Boleslaus' companions joined in and mortally wounded Wenceslaus. It is said that Wenceslaus' dying words were that he forgave his brother.

Wenceslaus is considered a martyr immediately. He was remembered for being a good king. Although only a duke in title, the legends and rumors of his piety quickly spread. Later, the German Emperor promoted Wenceslaus to King because of these deeds, although Wenceslaus had long since died. His piety and miracles attributed to his intervention as well as the steady course towards Christianity that Wenceslaus put Bohemia on, led to his canonization in the 1400s.

St. Wenceslaus, pray for us.


Posted by Michael Kress at Tuesday, September 10, 2013 No comments: 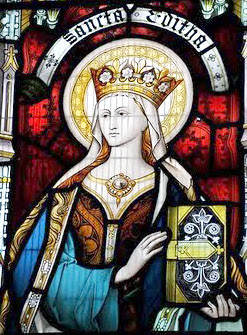 Today's saint bears resemblance to Tigernach. She was also of royal blood, though not legitimate, the head of an abbey and saintly by her life and dedication to God in the role as head of that abbey. Edith also gave up power when offered to her. One of the kings of England (Mercia and later Wessex), King Edgar. Her feast day is September 16.

King Edgar had been married before and it is unclear whether his wife, Elfrida the White, was still alive when Edgar went to the abbey of Wilton with ill intentions. At the abbey, Edgar found St. Edith's mother, St. Wilfrida, who was either a nun or disguised as one. According to Wilfrida's biographer William of Malmesbury, "Edgar carried [Wilfrida] off form her convent and became by her the father of S[t]. Edith" (Baring-Gould 142). Adding to the confusion about St. Wilfrida's status is that St. Dunstan forbade Edgar from wearing his crown for seven years for "the violation of a consecrated maiden" (ibid). Perhaps this was St. Wilfrida, but this is inconclusive. Malmesbury claims that St. Wilfrida was not a nun at the time and that there was discussion of marriage after the death of Queen Elfrida the White.

St. Wilfrida was determined to leave "and flying from her ravisher" (Baring-Gould 269) escaped to the abbey from which she had been taken. Shortly after her return, she was formally made a nun by Bishop St. Ethelwald and soon elected abbess. St. Edith was raised in the abbey and received permission to become a nun from her father, Edgar. St. Edith, the daughter of an abbess and a king, was a dedicated nun, but one who enjoyed wearing fine clothes. Bishop Ethelwald rebuked her for this in an era when there was non uniform for nuns (Baring-Gould 269). Her response is recorded by William of Malmesbury, "My father...the mind may be as modest and God-fearing under fine clothes as under a serge habit. The God I love looks to the heart and not to the dress" (ibid). It should be remembered that since she only lived to the age of twenty-two, this was said when she was a young teenager.

St. Edith continued to have influence through her royal lineage. Her father, impatient to see her daughter elevated, told her at age fifteen that she should be abbess of three abbeys. Since her mother was already abbess of Wilton, this would mean that St. Edith would have to leave that monastery to be made abbess of Winchester, Barking, and one more house (Baring-Gould 270). And so, St. Edith turned down the request and remained a nun in her mother's abbey.

Edgar soon died and his son, Edward, St. Edith's half-brother, became king. Edith dreamt that her brother was in danger and that his eye fell out. She predicted his death which was confirmed sometime later in Corfe Castle. Edith grew in piety and built a church dedicated to St. Dionysius. St. Dunstan, who had rebuked her father for his violation of a nun, came to the dedication. "S[t]. Dunstan was at the consecration, and when he noticed how continuously S[t]. Edith crossed herself, he caught hold of her right thumb and said, 'Never shall this thumb decay'" (ibid).

St. Edith's life was short. Near her death, one nun reported seeing angels singing in the chapel. "Go back; the angels await the good maiden." St. Edith died. Another story of her favor with God is that she had agreed to be a godmother to a noble woman's child. After Edith died, the baby was being baptized when St. Edith appeared and held the child. She was present until the end of the ceremony before vanishing. Her tomb was opened four years later and St. Dunstan declared that her thumb was incorrupt and it was venerated as a relic by pilgrims for a long time.

Posted by Michael Kress at Friday, September 06, 2013 No comments: 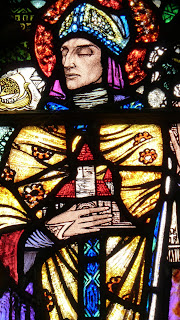 His story begins in Ulster, where a soldier from Leinster, became a retainer at King Eoclaid's court. His name was Coirpre. His frequent interactions of Eoclaid's family, and thus of his daughter, Der Fraích, led to an illegitimate pregnancy. When the child was born, Coirpre, who must have been terrified of the consequences, confessed that he was the father. Coirpre fled the court to his homeland of Leinster taking Der Fraích and the baby with him.

Der Fraích was the daughter of a king and thus a princess. Her child, the son of a princess and a courtier, was certainly noble, even part royal. She named him St. Tigernach, which means "princely". He was taken to the font for baptism where St. Brigit of Kildare received him, thus becoming his godparent. St. Brigit, who became an abbess and founder of many monasteries, would have a profound influence on young St. Tigernach, encouraging him in his faith and educating him.

When St. Tigernach was a young man, he traveled to Scotland. There, in Rosnat (now Whithorn), he continued his ecclesiastical education. One of his teachers prophesied that he had seen a vision of St. Tigernach founding a great church in his homeland. This presumably meant Ulster, the land of his birth and his mother's heritage, although he had grown up in Leinster. This has a profound effect on St. Tigernach, who set off for Rome to collect relics necessary for the founding of a great church. His pilgrimage ended when he returned to Leinster and to his godmother Brigit. Brigit was impressed by his zeal and was determined that he should be a bishop. Following the prophetical teacher's vision, he returned to the land of his mother and maternal grandfather, Eoclaid.

Although St. Tigernach's birth had been scandalous, Eoclaid and St. Tigernach reconciled when he saw the depth of St. Tigernach's character, his spartan lifestyle and dedication to the church. The current bishop in Clogher prevented St. Tigernach's elevation to bishop. As Eoclaid's relationship with his grandson improved, he eventually suggested removing the bishop and installing his grandson. St. Tigernach refused. Instead, he led an aesthetic life of prayer and contemplation. It was during this time that he performed his most important miracle. The Archbishop of neighboring Armagh had died. St. Tigernach's intercession and prayers brought him back to life, earning him a friend in the bishop. An angel spoke to St. Tigernach and instructed him to leave Clogher and to seek the frontiers of his grandfather's patrimony. St. Tigernach founded Galloon and then, after it was established, to give it away to Comgall of Bangor.
St. Tigernach went east and founded Clones where he established the Clones Abbey dedicated to St. Peter and St. Paul. Here, the land was fertile, but far from court life. It was a quiet existence which suited St. Tigernach who spent his time in prayer. His vision eventually worsened into blindness. It is said that an angel attended his soul into heaven.

Although St. Tigernach was born into a difficult situation, God clearly had plans for him. The fact that he returned to Leinster at just the right time to have St. Brigit of Kildare as a godmother was instrumental. St. Tigernach did not seek the limelight. His entire life was a balance between ambition and humility, with humility winning out in the end. When offered a bishopric by his grandfather, he turned it down because it was the right thing to do. St. Tigernach followed God to the backwaters and frontiers of a land he hadn't known since he was an infant. His hard work in Galloon was simply given away. St. Tigernach practiced charity and lived a prayerful life. The result was the founding of Clones, an abbey which was still around despite several fires when Henry VIII dissolved the monasteries (1536-1541), one thousand years later. St. Tigernach continued St. Patrick's work in Ireland and built a great church, not great because of its size or influence, but great because he followed God's instructions as given to him through the angel. The proof of his favor with God are his miracles, especially the rare claim of raising someone from the dead. He is a role-model for obedience to God's will and for humility and charity.

St. Tigernach, pray for us.

Posted by Michael Kress at Friday, September 06, 2013 No comments: